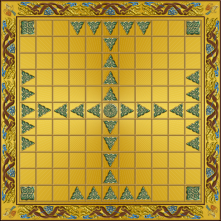 Tablut is a Tafl-game from Laponia, Lapland, and was described in 18th century by the Swede botanist Linnaeus. Tafl is a group of games from North of Europe that represent battles between two unequal forces; this characteristic distinguishes this game family from other board war games.

The differences between both sides are the number and properties of their pieces and the goal of the game. The largest force (Muscovites) has to surround the smaller force (Swedes), who has a special piece, the king.

Due to the historical origin of the game there are some uncertain details about the rules. Apparently, the description made by Linnaeus was not clear enough.

The main difference between the descriptions of the rules that we have found is given by the objective that the Swede king must get to win the game. The more widely accepted version is that the king must reach one of the four corners of the board; this gives both sides a chance at victory. In other versions the king only has to reach any of the edges of the board, which seems to be too easy.

The game is played on a 9×9 board. The central square is different from the others: it is called Konakis or throne, the Swede king stands there at the start of the game, and he is the only one who can occupy this position. 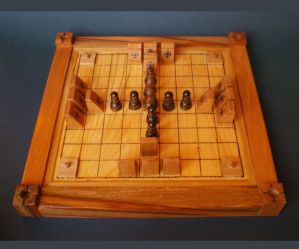 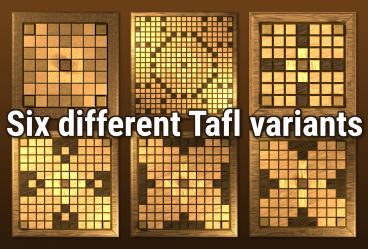