(The text below is from Cyningstan Traditional Board Games.)

There is a picturesque setting for Thaayam in R. C. Bell’s book Board and Table Games from Many Civilizations. Girls employed to scare birds away from the rice crop as it was ripening would play this to while away the hours (presumably, those hours when the birds were elsewhere).

Thaayam is a race game played on a square board. The pieces follow a simple but labyrinthine path around the board, starting on the edges closest to each player and proceeding to the middle. The object of the game is to enter one’s piece onto the board, and move them round this path, bearing them off from the middle before anyone else can.

Race games played on square boards have existed in India since at least the early centuries of the first millennium. Earlier games had an even number of squares, and one example, ashtapada, donated its 8×8 board to the new game of chaturanga (chess) before becoming obsolete. Later, games with odd numbers of squares predominated.

The earliest mention of Thaayam in English dates to the middle of the twentieth century, when a correspondent of R. C. Bell sent him the details of the game. The rules were then published in Bell’s book Board and Table games in 1960. Bell confirmed that the game was still played in his time. 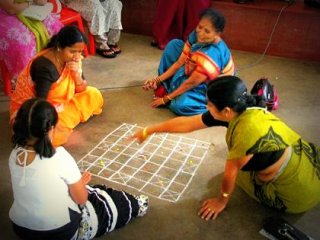 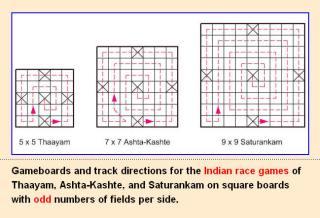