Text from: Board and Table Games from Many Civilisations by R.C. Bell. (Check website links at bottom of page for further information.)

No information is yet available about the history of this curious game. It may be a development of Chinese chess comparable to Draughts in Europe. The Jungle Game is also known as  Dou Shou Qi and Animal-Chess.

The pieces of one side are blue, and the other red.

Each player has eight animals. In the list below the numbers represent their respective strengths.

The strength of the playing pieces.

The blue squares in the middle of the board represent water. At the beginning of the game the pieces are placed on the appropriately marked squares. Blue moves first.

1. Each turn consists of moving one piece one square orthogonally in any direction. Only one piece may occupy any square.

2. An animal may eat any animal smaller than itself by moving on to its square. (The method of capture in chess.) The only exception to this rule is that the rat can kill the elephant since it can run into the elephant’s ears and so gnaw into its brain. If similar animals meet, the animal moving on to a square eats the animal already there.

(a) When the rat reaches the river it can enter it and move on the water squares as if it were on dry land. If it is in the river no other animal can attack it since they cannot move on to a water square. The rat, however, is unable to attack the elephant from a water square. If both rats meet in the river, the moving piece eats the stationary one.

(b) When a lion or a tiger reaches a square on the edge of the river, at the next move it can jump over the water in any orthogonal direction, landing on the nearest land square. It destroys any smaller animal that may occupy that square: if, however, there is a rat in the river in the line of the jump, it blocks the way and the lion or tiger is prevented from leaping over the water.

4. Each side has three trap-squares and the player’s own pieces may move on and off them without restriction, but if an enemy animal piece occupies a trap-square, it loses all its power and becomes weaker than any defending piece. On entry or as soon as it moves out of the trap it regains its full strength. [sic] (Confusing considering that an enemy animal piece loses its power when landing on a trap.) Animals of either side may enter and leave traps at will.

5- A player may not move any of his animals on to his own den.

6. When any animal enters the enemy’s den the game is won. 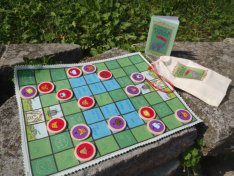