The Royal Game of Ur 16MB pdf

The Royal Game of Ur (also known as 20 Squares) is an ancient Sumerian game and is believed to have originated as far back as 5000 years (possibly stemming from an even old culture).

The gameboard in the pictures is one of five found in the royal tomb of Ur in Southern Iraq in the late 1920’s by Sir Leonard Woolly and dates back to around 2600 BC,  the period of the First Dynasty of Ur. The boards were found with their playing pieces, seven each, and two types of dice – tetrahedron dice and four-sided stick dice.

The board in the pictures presently resides in the British Museum. (Google, Dr Irving Finkel and the Royal Game Of Ur for further information) 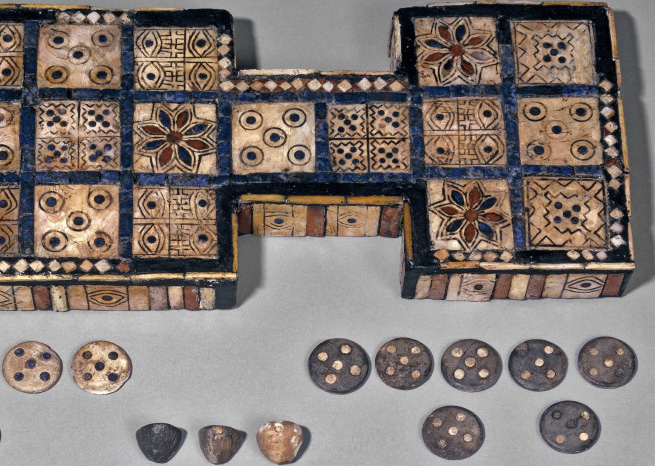 The board layout changed sometime after the first millennium BC whereby the centre lane – the main lane of contact between players – was extended and the side squares removed. Three rosettes adorn the centre lane but the two on either side of the starting lanes appear to have been removed.

Due to a small Babylonian clay tablet written in cuneiform script and translated by Dr Irving Finkel, a curator at the British Museum, the rules of play for a version of the game played nationally at the time was written down.

Below is the colour plate and Sir Leonard Woolley’s account of the four game boards found in royal graves during excavations at Ur, southern Iraq. The excavations where the boards were found took place in the late nineteen twenties and early nineteen thirties. More is known today about the game and boards than could have been know about at the time – even at the time the below text was publish in 1946.

“Four of these boards were found in the graves. All were apparently of the same type, though the decoration of the squares is very different in different examples.

The upper board shown here was very simple, little disks of shell with red or blue centres being set in the bitumen which covered the wood and formed the background. The lower example is much more elaborate, entirely covered with an encrustation of shell plaques inlaid with lapis lazuli and red lime stone and divided by lapis lazuli strips; in other examples the majority of the plaques, and also the white ‘pieces’, are engraved with animal scenes; but all agree in having the coloured rosettes in the middle row of the larger section next to the bridge.

The boards were hollow, boxes, in fact, in which were kept the counters or ‘pieces’, seven black and seven white, and the curious dice, triangular in shape with two of the four points dotted with inlay; three white and three lapis made a set, perhaps three for each player. How the game was played we do not know, but clearly the number five was very important, and one may guess that there were luck and unlucky squares.”

The Royal Game Of Ur Rules, Route and Layout